Our personal superheroes, antibodies in action. Image by Imgur (CC BY 2.0)

In the wake of the SARS-CoV-2 pandemic, relying on the body’s ability to deal with infections has never been more crucial. From deadly viruses to the common cold, each day our bodies are exposed to many different disease-causing organisms. Our celebrations of the efforts and dedication of frontline workers during the pandemic has been significant. In receipt of less recognition, however, has been the hardworking immune defence we have housed in our own bodies. Antibodies, also known as immunoglobulins or Igs, are some of the frontline workers of our own immune systems, protecting us against infections old and new. As our personal team of superheroes, antibodies have many capabilities and potentials. These are discussed in this article.

Antibodies are the immune system’s natural police force against foreign organisms; they are large, Y-shaped, protective immunological protein molecules produced by the immune system. Antibodies, as the name suggests, work against ‘bodies’ — but not our human bodies. Rather, the bodies they work against are foreign particles called antigens. Antigens can come from a range of sources. For example, they can originate in bacteria and viruses, in flower pollen, and in food additives. Our bodies work in a highly-regulated sequence to recognise, evaluate, and counteract the source of these antigens.

Antigens can be broadly classified into three categories depending on their source — exogenous (produced outside the host), endogenous (produced inside the host by viruses and intracellular bacteria), and autoantigens (produced by the host). Antibodies have a unique specificity allowing them to exclusively recognise and stick to only one kind of antigen.That is, an antibody against one type of bacteria won’t be effective against another type. Most antigens that our immune system finds and recognises are autoantigens, however, they only counteract exogenous and endogenous antigens, which could cause harm to the body. Interestingly, a fundamental cause of autoimmune diseases such as rheumatoid arthritis and inflammatory bowel disease is the body’s own dysfunctional response against autoantigens.

The interaction between antibody and antigen can help to directly ‘neutralise’ a threat. This can either be done by blocking the receptor or entry pathway which the pathogen uses to enter a cell, or by signalling other parts of the immune system to attack the target. Antibodies against a particular antigen remain in a long-term, distant relationship with our bodies even after an infection episode. They form the basis of our immunological memory so that the next time the same antigen is encountered, the immune response can be quicker and more effective. This relationship works on an ‘ad-hoc’ basis and forms one of the key components of our body’s quick immune response during the second and any subsequent episodes of a specific infection.

The development of antibodies starts from antigens themselves — which, arguably, is somewhat ironic. When antigens bind to a certain type of white blood cell known as a B cell, the binding triggers the B cell’s division into another cell type called the plasma cell. These plasma cells are the body’s antibody production factories, developing and setting off millions of antibodies on their treasure hunt for the source antigen.

Humans have five classes of antibodies — IgA, IgD, IgE, IgG, IgM. These five immunoglobulins are found throughout the body, from the breathing and digestive pathways, to the skin and mucous membranes. Certain antibodies such as IgG form some of the crucial ‘early immunological cocktail’ that passes over the placenta from the mother to the fetus during embryo development. This is a key formative step required for the complete development of the newborn’s immune system. 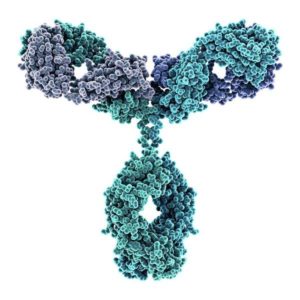 Antibodies have a Y-shaped structure with four polypeptides – two heavy chains and two light chains. Image by Imgur (CC BY 2.0)

Determining how long antibodies actively search for antigens is keyin estimating immunity against a given virus or bacteria. Research has proven that antibodies don’t have particular expiry dates, and could remain effective in protecting against infection across varying timelines. Topically, the antibodies our bodies produce against COVID-19 are estimated to be effective for between seven months and for the rest of our lives. To read more about antibodies in the context of COVID-19, visit 1.

It may seem odd to say that ‘antibodies read the news’, but there is some truth in this seemingly bizarre statement… Vaccines have been our antibodies’ insightful news source, presenting a complex yet distinctive mechanism of tricking our B cells into differentiating into plasma cells and producing antibodies against inactivated foreign particles. Our success with vaccines would not have been possible without the fundamental immunological memory that our antibodies offer.

In terms of their therapeutic potential, antibodies are a useful, non-invasive co-treatment option for a number of diseases. The possibility of using antibody treatment pathways for conditions such as Alzheimer’s, rheumatoid arthritis, multiple sclerosis, and even cancer is being explored. The advantages antibodies present are numerous: they include a short production time, relatively low production costs, high stability to pH, high affinity for antigens, and the ability to continuously adapt to changes in antigen structure and offer higher compatibility.

In conclusion, antibodies are our friends with benefits — as the frontline workers of our bodies, they remain on-guard to constantly recognise, evaluate, and counteract infectious agents. Our working relationship with antibodies lasts a lifetime, with immense potential to modify the scope of their functioning for therapeutic advantages. After all, why don’t ants get sick? ‘Cause they’ve all got antibodies! To discover more about antibodies and their potential, visit 2.

Denver Fabiano is an Immunology undergraduate at the University of Glasgow. Having gone to 2nd year straight from high school, Denver manages a busy university schedule often filled with more extracurriculars than his university curriculum. Apart from binge-watching lectures, Denver enjoys public engagement, creative writing & constantly bantering about with his mates.