Wild Medicine; The Art of Disease Control in Endangered Species

Virunga Gorillas are bouncing back from the brink with a little help from modern medicine. Image credit: Terese Hart via Flickr

For the dinosaurs, extinction came in the form of an asteroid strike. For the dodo, it was over-hunting by humans. For the gorillas, might it be the common cold? When considering the most important threats to endangered species, one might not think of disease. However, we are becoming increasingly aware of the risk infections might pose to wild animals, which in combination with other factors like climate change or habitat destruction make a deadly combination. Some might argue that disease is an unstoppable force of nature and part of life; however, disease outbreaks in wild populations have been on the rise for some time as a result of human-mediated habitat alteration. For a species on the brink of extinction, that one bad bout of “flu” might be all it takes to push the population to the point of no return. While the idea that we need a better understanding of how disease dynamics influence wild animals is not new, its importance is gaining increasing recognition in the conservation world.

Usually, our interest in wildlife disease begins when there is a risk of infection to humans or livestock. We don’t have to look too far from home either; wild UK badger populations have long been in the media spotlight for their suspected role in bovine tuberculosis transmission to cows. However, more in depth consideration of the risk to endangered species is slowly becoming apparent. Sadly, we can cite many examples of endangered animals lost to bouts of disease. Perhaps the worst case in recent history is chytridiomycosis infection in amphibians. This deadly fungal skin disease is thought to have rendered over 200 species of amphibian extinct or in major decline. Despite being one of the most studied and best understood wildlife diseases, there remains a considerable gap in the translation of research into usable post-epidemic management. Similarly, in 1994, lions in the Serengeti National Park were almost wiped out by a deadly outbreak of canine distemper virus (CDV). The disease, which has long been associated with domestic dogs, has now been found in a wide variety of wild animals, from big cats to wolves. Although originally thought to be spread to lions by domestic dogs living around the park, new research at the University of Glasgow has suggested that wild animals in the park are potentially becoming reservoirs for CDV. Their results suggest the current management plan of vaccinating only domestic dogs may need to be revised, but a new strategy is some way off just yet.

Disease outbreaks in wild species offer many complex challenges, from detection and monitoring through to control. Unlike human diseases, wild animal infections can go relatively unnoticed for months or years. For example, Ebola, the disease responsible for the ongoing human epidemic in West Africa, has also been rife in great apes for some time. In fact, it is thought to have wiped out a third of Chimpanzee and Gorilla populations since the 1990s. (A good article to read on the topic can be found here.)

These stories should act as a warning cry; as we try and correct our devastating impact on the world’s biodiversity, care should be taken that we don’t unwittingly put species at risk of extinction from diseases along the way. Whilst we might think that investing money into ecotourism would be an ideal way to increase revenue for local conservation campaigns, there is always a cost to bringing humans closer to wild animals. It may come as no great surprise that some of our closest relatives can suffer from human infections. Great apes are thought to be able to catch common colds and respiratory diseases from contact with humans; a problem that will only rise with increased human activity. Although these common bugs are mostly shrugged off by our own immune system, an infection in a chimpanzee can be devastating. Luckily for the apes, the field of modern epidemiology is now on hand in a way that would not have been possible not so long ago.

The field of wildlife epidemiology and disease control is still relatively in its infancy, but it has made considerable strides. Advancements in technology mean that we can model diseases ever more accurately, so are more aware of the risks they pose. In apes, recent findings highlight that social networks can play a part in their vulnerability to disease. Chimpanzees, who tend to be highly social creatures and interact with each other more, are much more susceptible to bouts of infection than their introverted orange counterparts, the orangutans. As a result of their greater susceptibility, human visitors eager to spot their chimp cousins in the wild are now usually required to wear masks and keep at a distance. 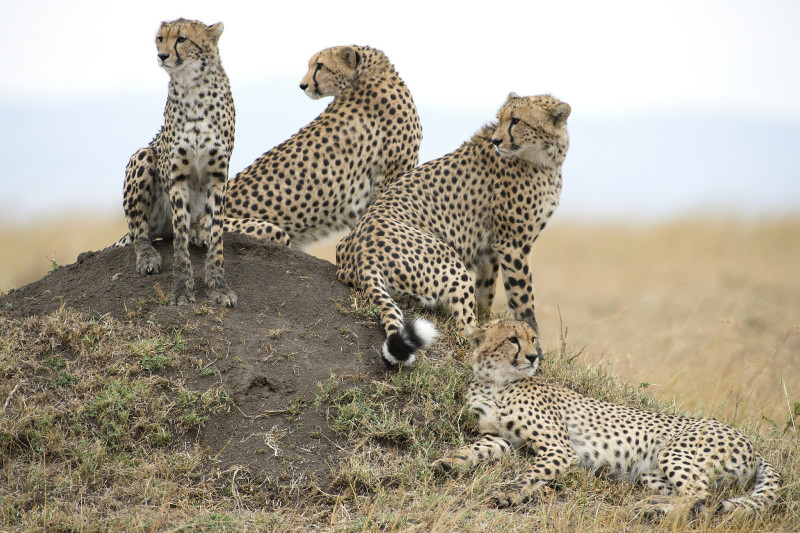 More than half of emerging diseases affect carnivores, like the cheetahs in this picture. Image credit: RayMorris1 via Flickr (CC BY-NC-ND 2.0)

There are many ways in which endangered populations can be protected against potentially fatal disease outbreaks, including vaccination campaigns, culls and quarantines. In most cases, these try to be as minimally invasive as possible, but should we, in fact, be striving to do the opposite? Recently, conservationists have started to take matters into their own hands, and have piloted drastic techniques that involve the active treatment of wild animals whenever they become injured or ill.

Mountain gorillas are a critically endangered species, which have been pushed to the brink by a combination of poaching, civil unrest and disease transmission from contact with humans. In a last-ditch attempt to save a population of gorillas in Virunga National Park (Democratic Republic of the Congo), a team of on-hand vets and rangers are constantly monitoring, ready to spring into action at the first signs of trouble. These jungle giants are mostly treated for respiratory disease and damage from snares, among other ailments. Although this might seem excessive, this ‘extreme conservation’ has made an incredible difference. The Virunga gorilla numbers are up by 50% from their dwindling size of approximately 250 individuals in 1981, and much of this is attributed to veterinary care and protection from poachers. Unfortunately, it is simply not possible to do this with every endangered species and currently should only be considered in extreme cases.

Perhaps one of the greatest weaknesses in conservation is a lack of understanding or appreciation for risks posed by disease. While some of the most studied examples come from carnivores and primates, this problem extends far more widely. From marine mammals to reptiles to coral reefs, animals of conservation concern face an uncertain future unless we are prepared to step up monitoring and collection of data on disease. However, there are many rays of hope that effective disease management can be implemented in populations like these. In 2007, the Iberian lynx, which is regarded as the most endangered cat in the world, was almost wiped out by a sudden high mortality outbreak of feline leukaemia virus. They owe their survival to a quickly implemented and well thought out control programme, enabled by extensive and long-term data monitoring. Thanks to modern day technology, medicine and epidemiology we have the tools; it just remains to be seen if we will use them.